Carolina Bartumeu (1993) begins her musical studies at the age of 7 in her native country, Andorra, at the Institut Andorrà d’Estudis Musicals with the professors Cristina Sahuquillo and Lluís Claret. At 17 she moves to Barcelona, where she graduates in the Conservatori del Liceu in 2011. In 2015 she obtains the Bachelor degree at the Hogeschool voor de Kunsten Utrecht, Holland, with full marks under the guidance of professor Ran Varon. In the same year, she receives the extraordinary prize of the Utrecht’s Conservatory, the EMIR Steyerbergprijs.

In 2015 she begins a Masters in Performance with professor Melissa Phelps in the Royal College of Music, London. During her years in London she is awarded with the Neville Wathen award provided by the RCM. She is also sponsored by the Credit Andorrà foundation. She graduates with distinction in 2017. 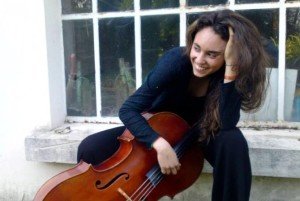 Carolina has participated in numerous masterclasses with musicians such as Frans Helmersson, Gary Hoffman, Dmitri Ferschtman, Roel Dieltiens, Gavriel Lipkind or Gustav Rivinius among others.

Her debut as a soloist when she was 12 was with the Jove Orquestra Nacional de Cambra d’Andorra (JONCA), where she has been reinvited on several occasions. She has also performed as a soloist with the Utrecht String Orchestra (USO). Both as a soloist and with various chamber music groups she has played in different countries like Andorra, France, Spain, Portugal, Switzerland, England and Holland, in halls like The Amsterdam Concertgebouw or the Wigmore Hall and the Royal Albert Hall of London. She has also performed in Canada and Japan. Recently, she took part in the International Music Festival of Crimea, in which she performed as a soloist in the Big Hall of the prestigious Tchaikovsky Conservatory in Moscow.

Bartumeu also experiments with the free improvisation, therefore in 2017 she became the musical co-director and the cellist of the show Dry Room, directed by artists Eldaring Young and Zi Ling. The performance combines live music and contemporary dance and it premiered in the World Design Festival, Taiwán.

Very active as a chamber musician, she co-founded the Trio Casablancas (violin, cello and piano), with whom, last year, she gained the 3rd prize at the International Chamber Music Competition Antón García Abril. She has also an interest in the contemporary music; with the Duo SuonoSuono (cello and sax) she has presented the ‘Shaping Sounds’ project which premiered in the Auditorio Nacional de Galicia as part of the ‘Xornadas de Música Contemporánea de Galicia’.

Since 2016 she is a member of the Orquestra Nacional Clàssica d’Andorra. She regularly works with the Orquestra de Barcelona i Nacional de Catalunya or l’Orquestra Filarmonica di Bologna among others. During the 2019/2020 season she worked with the Real Orquesta Sinfónica de Sevilla, Spain as a co principal cellist.

Since december 2019 Carolina owns a french cello made by François Pillément in Mirecourt, France, in 1710.